On Thursday the Grumbling Tummy ensemble headed down to Northumberland to spend some time with the lovely Pettinger-Thomson’s who were holidaying for a week in Embleton.  The PT’s are brilliant at sharing their  holidays with us and food and wine always plays a starring role in proceedings.

The weary travellers arrived at 6 on Thursday to the welcome call of “cheese straws anyone” from Senior PT,  who has a  penchant for these buttery treats.  Cheese straws down the hatch, followed by a much welcomed glass of red and it was time to get the kiddy’s  to bed and tuck into the feast being prepared.

I am a strictly one pot cook who flaps at the idea of juggling timings of several dishes.  Cat, chief cook of the PT brigade is however the queen of cooking many dishes at once and producing an array of scrumptious dibbley-dabs.  The whole kitchen was bathed in the aroma of exotic spices as Cat nonchalantly cooked up an Indian feast. 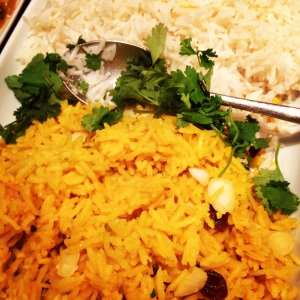 Using a lethal Delia/Jamie combo we were treated to two different types of rice, home-make vegetable pakora, chicken and chickpea korma, red onion salad, chappatis and naan bread.    It was to quote the youngsters “amazeballs”.  Spicy, zingy and moreish!  The pakora had some surprise hunks of chilli lying in wait to blow your head off but that was brilliant too and there was plenty of the red stuff to dilute any spice shocks we encountered.

After staying up till 2am putting the world to rights over far to many glasses of red wine with Cat, I was what one might call crispy the next day, otherwise known as hungover to buggery!  Food was going to be a kill or cure experiment.  Following a bracing walk along Embleton beach we found ourselves in Seahouses which is a slightly faded wee Northumberland coastal town.  Extreme temperatures mixed with tiny tots led us to the indoor play area, much to the horror of senior PT!  Soon however there was happy faces all round as we sipped hot chocolate and watched our mad children throw themselves around the soft play area.  Too hungover to move we decided to stay in the indoor play emporium to eat.  This may surprise you considering my horror of food in soft play areas but this was an entirely different proposition.  You see,  it was owned by the same folk that had the fish and chip shop next door and guess what the soft play menu consisted of?  Result!

Three fish and chips and one scampi and chips set things right for the weary troops.  I had the scampi which was crisp and golden on the outside and all roasty toasty and soft on the inside, with oodles of tartar sauce to dip.  The chips weren’t the crispiest but I was hungover so they were a gastronomical delight as far as I was concerned.

A quick look at the beautiful Bamburgh Castle and it was time to bid farewell to the PTs.  We had only travelled a few miles however when we felt the need to stop off once again for re-fuelling.  This time in a tiny and rather odd little farm tearoom called ‘The Oxford’.  It was off the beaten track and the sunny conservatory was empty but for one lovely local couple.  This little tearoom was a gem – tea served in lovely big flowery pots and a limited but tasty choice of sweet and savoury treats all made on the premises, using produce from the farm.  Millionaires Shortbread for me which hit the spot and a rather  impressive meringue and ice-cream with a strawberry coulis for B.

We were so impressed with the beauty of Northumberland that we are looking at going back in September for a week of  beaches and gastronomic pleasure!