Short silence is followed by ” Oh right” (Me)

Faced with the myriad of gastromic delights that the town of St Andrews has to offer my lovely husband decided in his wisdom to ferry our family out of town to the local pub in Guardbridge for a belated mother’s day lunch. Guardbridge is to me a place that you pass through very quickly on the way to Leuchars train station and in more than 20 years of eating out in the St Andrews area I had never once considered dining there.

Despite my reservations,  first impressions were pretty positive.  The Inn itself is in a lovely traditional building and inside it is very cosy and well …. pub like.  They do have a nice bright room for meals but you can also eat in the bar which was much more inviting with its’ cosy wood burning stove ablaze. The bar has about five tables so it feels quite intimate (in a good way) and the overall vibe is very relaxed and friendly. Despite becoming increasingly happy with my surroundings I did expect a rather hum drum pub menu with standard quality fare. It was then that I started to clock the dishes being scoffed by the very  happy looking folks around me and it became clear that there was nothing hum drum about it.  B looked smug! I hate it when he looks smug!

I was pleased to see a modestly sized menu (beware the restaurant who gives you a million choices –  it can’t possibly all be freshly cooked) which included such non pub grub delights as seared fillet of salmon on beetroot & kale risotto and roast chicken stuffed with cream cheese & spinach and wrapped in parma ham, served with a garlic cream.   These nestled happily along side more traditional options such as fish and chips, well it wouldn’t be a Fife menu without them now would it?

Before the food fest a note about the staff.  Bloody fantastic!  They are open and friendly, brilliant with kids, accommodating, informative and everything else that you could possibly want from restaurant staff. 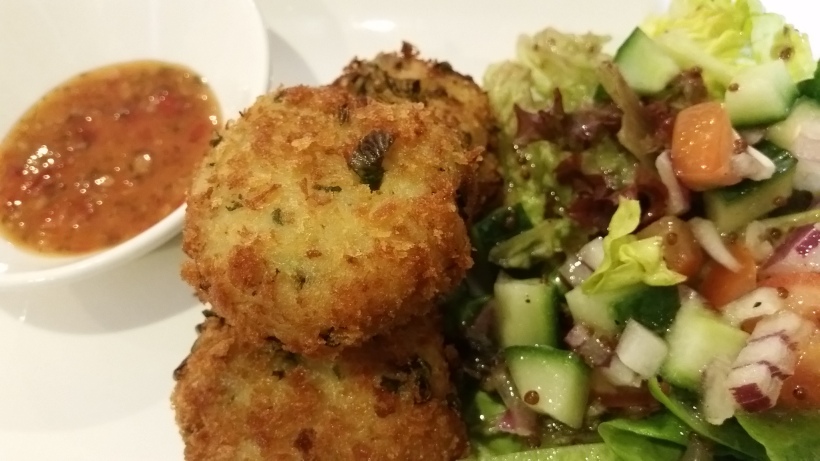 Now to eat: I started with Thai Crab Cakes with a sweet chilli sauce and B opted for the rather unusual sounding Mushroom and Turkey soup.  The Crab Cakes were delicious however B’s soup packed a flavour that made me consider shouting fire so that I could sneak into the kitchens and half inch the recipe.  Far fetched perhaps,  but nailing a soup like that would make me a very happy lady indeed.  This delicious creamy soup was finished off with an elegant swirl of fresh pesto making it look as delightful as it tasted. Now I was properly impressed.

Both B and I ordered the beef roast dinner as our main course on the basis that the lady next to us had it and it looked utterly divine as far as roast dinners go.  We were not disappointed.  They didn’t make the fatal mistake of piling mounds of roast dinner titbits on the plate Jenga style.  Instead there were a few beautifully pink slices of roast beef, a lovely Yorkshire pudding, a few roast potatoes and a medley of cubed swede, carrot and celeriac.  All items were cooked beautifully and were extremely flavorsome.  The whole shebang was finished off with a rich red wine gravy which was extraordinarily nice.  A daub or horseradish cream and we had a winning combo all round.

Never one to stop at a modest two courses we pushed forward to the dessert menu.  I really could not get past the idea of hot banana sponge with toffee sauce and hazelnut ice cream from local ice cream emporium Luvians.  So  imagine if you will a sticky toffee pudding which lacks the heaviness of the dates.  A sponge with a delicate banana flavour which is so light it is in danger of floating away.  Then imagine a warm silky toffee sauce cascading over it and a generous helping of the creamiest hazelnut ice cream you are ever likely to encounter.  Toffee, bananas, nuts and cream – heaven.

I barely registered what B was having for desert.  A glorious parfait involving exotic fruits.  It certainly looked the business and he appeared to be smiling – but oh the banana sponge!  After coffees with a little piece of tablet (full to bursting) we waddled back to the car.

I am quite shocked that for over two decades of eating out in restaurants in and around St Andrews, this wee gem had never entered my head as a dining possibility despite having driven past it literally hundreds of times. Next time I want fresh local food cooked to perfection in the St Andrews area I know where I will be heading – and so should you.