I was delighted to be involved in the Crail Food Festival’s Blog Initiative this year and was one of 12 bloggers who were matched with local producers taking part in this weekend’s festival.

When my assignment for The Crail Food Festival  www.crailfoodfest.co.uk pinged into my inbox I almost whooped for joy.  My mission, which I most definitely chose to accept, encompassed two of life’s greatest pleasures – cheese and cake.  I was to visit two restaurants that pride themselves in using local produce, the St Andrews Cheese Farm Company’s restaurant and Kellie Castle Kitchen Cafe.

The St Andrews Cheese Farm Company is the only farmhouse cheese-maker in Fife and as well as producing unique cheeses from their own herd of Holstein Friesian cows, wherever possible they also “fly the flag” for Scottish Farmhouse Cheese-making.  As Jane Stewart, who runs the business along with husband Robert says “we are all about food provenance … visitors want to know what cheeses we make and they are extremely interested in the process, keen to taste the product and invariably want to know where and how they can purchase it on their way home” .

I’m not surprised that Jane’s visitors are keen to buy their famous Anster Cheese; I can testify that is indeed delicious.  I’m a long standing fan and regularly buy it at my local farmers market.  However,  gobbling it down in record time with a box of oatcakes is about as far as I have travelled in terms of culinary experimentation.  I was about to experience a whole new world of cheese in Jane and Robert’s restaurant.

The restaurant is large, bright and airy with beautiful views across the East Neuk countryside.  Jane explained that their cheese is incorporated into the menus wherever possible “whether it be omelettes, sandwiches, soup, or in other speciality dishes”.

Jane’s hot tip from the menu  was their most popular dish – Hot Smoked Salmon served on crushed potatoes and topped with a poached egg and hollandaise sauce.  That indeed sounded irresistible…. until I noticed one of my personal food heroes on the menu – Stornoway black pudding, served with a potato and Anster cheese rosti alongside beetroot chutney.

The Stornoway black pudding was, as ever, utterly melt in the mouth divine, the rosti was lovely and loose, unlike some cremated versions I have tasted in the past and the Anster cheese complimented it beautifully .  The whole dish was brought together perfectly with the beetroot chutney.  As John Torode would say it was “a beautiful thing”.  My mum and husband who had come along for the ride enjoyed a cheese and ham omelette and the Special Ploughman’s lunch.  Both made all the right noises and clearly hit the mark.

We would have loved to stay on to sample the famous meringues but time was ticking and we had a cake appointment elsewhere.  But we didn’t leave before browsing some of the other local food heroes available to buy. Dalchonzie Chutneys, Galloway Lodge Preserves, Summer Harvest Oils, Chrystalls shortbread, Barnett the Bakers Cheese Oatcakes, Adamson’s oatcakes, Trotters Independent Condiments and St Andrews Brewing Company are just some of the local producers on display in the small retail area.  We settled upon a jar of onion marmalade from Dalchonzie and chutney made by St Andrews Cheese Farm which was so fresh the label was not yet on – yum.

Five minutes later we found ourselves in the beautiful grounds of Kellie Castle, which lies 5 miles North of Pittenweem.  A National Trust property dating from 1360, it is renowned for its lavish interiors but should also be renowned, in my opinion, for its baking.  The Kellie Castle Kitchen Cafe may be small but it’s perfectly formed – rustic and utterly charming.  Kathryn Baker, whose own history is steeped in baking, has recently taken over the running of the cafe and is working towards “making the most of as much local produce” as she can.

The Kellie Castle Kitchen Cafe doesn’t have to look far for inspiration either, with many of the products used coming from their very own kitchen garden – you don’t get much more local than that!  Kathryn believes that being able to actually show visitors where the fruit in their cakes come from is “a great way to interact with customers”.  The local food heroes at Kellie Castle are their own gardeners who produce a whole host of goodies – from herbs and vegetables to salad and fruit.

Kathryn, a hero in her own right, is full of enthusiasm and passion for her produce and this shines through in the way she talks to her customers and tells them all about what Kellie Castle Kitchen has to offer. 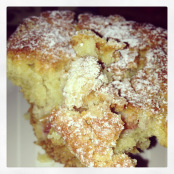 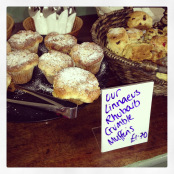 On the day I visited, it was all about the rhubarb – seasonal and perfectly tasty.  I am one of those people who were under the misguided impression that rhubarb was plain old rhubarb.  Kathryn soon enlightened me.  The Castle garden produces at least 30 varieties of the pink stuff, including Whitby, Fenton’s Special and Hawkes Champagne.

Fortunately or perhaps unfortunately for my waistline, we chose a table right next to the beautiful “dresser of temptation”.  Amongst the cakes on display were a plump Victoria Sponge, a Citrus and Rhubarb cake, Rhubarb Crumble muffins, peppermint slices and a chocolate ginger tray-bake.  My husband chose the Victoria Sponge, Citrus Rhubarb cake won the day for mum and it had to be Rhubarb Crumble Muffin with whipped cream on the side, for me (the cream is not really needed but I am a bit greedy, so there!).  We also felt the need to take a peppermint slice and a chocolate ginger slice home with us for later (because we needed more cake).

The Rhubarb Crumble muffin was Kathryn’s top tip and she was not wrong in recommending it: a crunchy top, moist light sponge and lots of fresh juicy rhubarb to surprise you in the middle – delightful.

The large slice of Victoria Sponge tasted exactly as every Victoria sponge should taste, but often doesn’t – moist and light as a feather.  My mum wolfed down her sponge and I didn’t get the chance to taste it but it definitely got the thumbs up. As for mini me – she was too busy looking for princesses, to eat cake!  I hate to say it but I am very glad I don’t have Kathryn’s talent for baking as I would be the size of a house, her produce is truly stunning.

As well as cakes there were soups and savoury herb scones on offer.  Kathryn told us about the Swiss Chard, herbs and wild garlic that are flourishing at the moment and as the contented Camerons rolled out of Kellie Castle we could smell the beautiful aroma of wild garlic all the way back to the car park.

I would take on an assignment like this every day of the week. As well as tasting stunning produce and learning more about the food on my plate, it was a joy to encounter such a depth of passion from the people running both businesses.

Thankfully the importance of food provenance is gaining momentum in this country as our desire to understand more about the journey from field to fork increases. 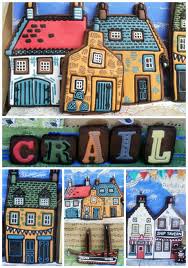